I am thrilled to post that my game, Elephant in the Relationship, has been selected to be shown at Game Show NYC, a games, education and art conference.

Initially conceived as a serious game in Tracy Fullerton’s Game Design Workshop class, the Elephant in the Relationship team (Andy Uehara, Casey China, Joshua McVeigh-Schultz and myself) has worked to sculpt the game over several iterations and various playtests.

Elephant in the Relationship is a game for 2 to 4 players in which players try to communicate deeply troubling relationship issues. Players take on the roles of two people in a personal relationship and turn the drama of a potentially risky (or intimate) interaction into spectacle for a group to enjoy. The game fuses Pictionary-style drawing and guessing mechanics with elements of doll-play and improvisational theater, asking players to place themselves into a difficult emotional scenario with their partner. 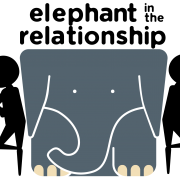 Elephant is submitted to Meaningful Play

Presenting Elephant in the Relationship at IndieCade 2018 Night Games!

An Update on Seymour Deeply
0 replies