As part of my Masters of Fine Arts in Interactive Media at USC, I was required to complete not only a thesis paper, but also a thesis project. My interest in using stereoscopic 3D as an integral part of a narrative lead me to develop what has now become Seymour Deeply, the project. The project is an immersive interactive storybook using stereoscopic 3D combined with Microsoft’s Kinect for gestural interfacing.

Seymour Deeply at Other Worlds, the 2012 IMD Thesis Showcase

The story of Seymour is a retelling and continuation of the Jack and the Beanstalk fable, but from Seymour’s point of view. Seymour is the son of Stanley Deeply, who many may remember as “The Giant.” More is posted about Seymour on the project’s site,  here.

Since early 2012, I’ve been working with USC’s Annenberg Innovation Lab and The Alchemists on creating transmedia learning extensions from David Wiesner’s Caldecott Award winning children’s book, Flotsam. I can’t say much about the project at the moment, but I’ve been working on several aspects of expanding the story of Flotsam into an educational platform for kids aged 7-10.  I’ve developed early prototypes of a lens-centric Explorer Kit, a Trading Card game, the UI/UX of a dynamic digital book for the iPad as well as some work associate producing on the project.  The project is currently finishing up a major prototype phase, but I’ll post more on this fascinating project as development continues and as I’m allowed to share details.

Elephant in the Relationship

During Fall 2009, my first semester of grad school, one of my required classes was Tracy Fullerton’s wonderful Design for Interactive Media class.   The class focuses on Iterative Design and paper prototyping of games and other interactive designs.  One of our assignments  was to create a serious game.  Working with the amazing team of Andy Uehara and Josuha McVeigh-Schultz, we came up with a party game called Elephant in the Relationship.  EitR (or “Elephant” for short) is a role-playing game where teammates play partners in a relationship (any relationship, romantic or otherwise) who have an huge, unspeakable issue in that relationship that needs to be addressed.  One team mate is given a very limited vocabulary which he or she uses to try to communicate that issue to the other team mate.

Playtests in class were very successful and as a team we had such fun developing the game that we decided we wanted to expand on it and take it to the next level.  During summer of 2010, aided by the wonderful Casey China (shown in the picture below), we embarked on the second phase of development of Elephant in the Relationship, trying new iterations, new mechanics and scheduling new playtests.

Elephant has been featured in at Game Show NYC, a games, education and art conference in Spring 2011 and at Arse Elektronika 2012 in San Francisco in September 2012.

As development of EitR continues I will update this page as well as the main blog feed. 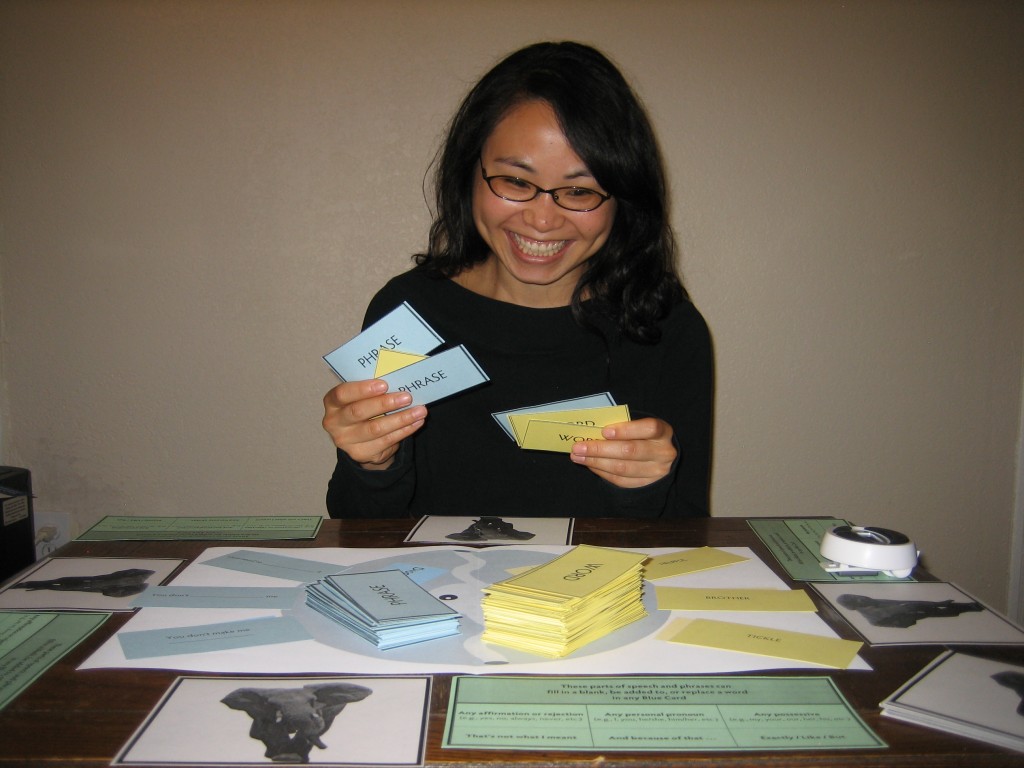 Casey China demonstrating an early iteration of
Elephant in the Relationship

Coming out of a project in my World Building class, I was finally able to explore an idea that I’ve had for some time — using a game to test a player’s deeper motivations and prejudices.  More will be written on this soon, but for now, below is a teaser trailer from an early prototype of Puddinheads.